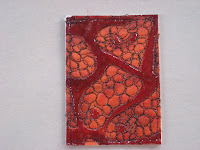 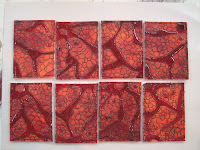 This year the group is going to do colors for the trades each month. Red is the color for February - how appropriate. My piece is titled PASSION which red always seems to signal to me.
I stamped all over my batik fabric scrap (which was in shades of red, orange and brown) with a handmade stamp. The stamp reminds me of something inside our brain that is all connected. When dry, I placed a red mesh fabric from a floral arrangement, over the entire piece and free motion quilted around the stamp and filled in with different sized circles using black thread. I cut them apart and added Glossy Accents onto the stamped parts to bring out the red. I think this may be one of my favorites! I loved out it turned out.
Don't forget to check out all the others at http://artsinthecards.blogspot.com
Posted by pcoxdesign at 10:36 AM 2 comments:

I had to decline participating in our December trade which was a flat Santa trade. They were absolutely adorable. But everything is calming down once again and our January trade was TWO to celebrate our 2nd anniversary. I can't believe we have been doing this for two years already! So many wonderful pieces were traded!
My contribution for the two trade was based on the anniversary and what does one give on the second anniversary. How interesting that it is cotton! So I used cotton fabrics to create little cotton plants to give on our second anniversary. The background was my flour paste resist in blue for the sky, then a metallic green for background plants and a combo rust dyed with tanin on white cotton for the earth colors. I used puffy paint for the plant and cotton balls sewn in for the cotton of course.
I have managed to misplace my camera so a friend was kind enough to use her camera phone to take a picture for me. So no group shot this time around. Sorry
Posted by pcoxdesign at 6:33 AM No comments: 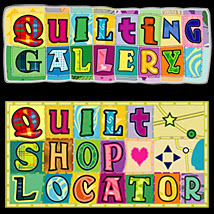